His beginnings were in the workshop of the master Luzán, years later he travels to Italy.

During the years 1771 and 1772 he painted the frescoes of the Coreto of the Basilica of Our Lady of the Pillar, of the church of Remolinos and the one of Muel, although its relations with the Zaragoza town hall were quite tumultuous. 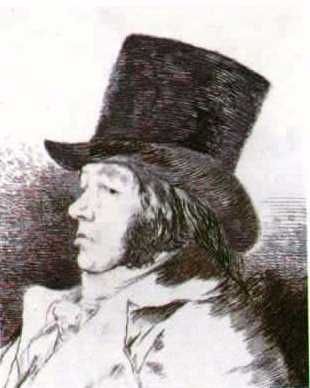 The marriage with the sister of Bayeu a year later facilitates the installation in the Court, where he works cardboard for tapestries under the direction of Mengs.
In 1774 he began the paintings of the Cartuja de Aula Dei. Years later Goya entered the Academy of San Fernando (Madrid) and became, in 1785, a painter of King Carlos III and, in 1799, a painter of the chamber of King Carlos IV.

In 1793 he suffers a serious illness that leaves him deaf. Deafness inclines to isolation and introspection. Stop considering society as a set of friendly paintings and constructions and begin to consider the negative angle of conventionalism, then Goya remains a time in the house of the Duchess of Alba in Sanlucar.
To the bitter criticism is added an almost feverish imagination, a turbulent inner world, which expresses in the first Caprichos, works conceived as a free digression in a world without sense and that in no way could be destined to its old clientele.
Because of these works the stamps were removed under threat of the Inquisition.
At the same time he continues to fulfill his commission as a portraitist; in 1800 he painted "The family of Carlos IV".

From 1808 the War of Independence, with its sequel to   horrors, it is going to suppose a painful experience that intensifies its pessimistic and critical vein.
The scenes of May 2 and the series of drawings and engravings of the Disasters indicate the levels rarely reached in the expression of a people's pain and the degradation of feelings.
After the war, Fernandi VII replaced him in his post as a chamber painter, but liberal convinced, the excesses of absolutism inclined him to isolate himself from all worldly treatment.
It is the time of his Black Paintings on the walls of his house on the other side of the Manzanares.

With the entry of the Hundred Thousand Sons of San Luis, in 1823 and the initiation of the absolutist repression, Goya decided to leave Spain, and settled in Bordeaux, where he died in 1828.

The trace of Goya in Aragon we can follow in the next places:

The Museum of Bellas Artes in Zaragoza.

The Provincial Museum of Huesca.

The Basilica of Our Lady the Pilar.

The Carthusian Monastery of Aula Dei.

The Archbishop´s Palace of Zaragoza.

The Parish Church of Remolinos.

Muel: The Sanctuary of Our Lady of the Fountain.

Others works in Aragon.