The Charterhouse of Aula Dei was declared a National Monument in 1983.

Goya's paintings in the Aula Dei, were a cycle of 11 elements made in 1774 in oil on the walls of the Charterhouse of Aula Dei, near Zaragoza (Road Peñaflor).
Currently there are 7, some of them quite restored, 4 were replaced early in the century by canvases painted by the brothers Buffet.
Goya could do these jobs because of his brother Manuel Bayeu, who was Cartuja Aula Dei. They can see the mastery of a young Goya 28.

The wall decoration is divided into large compositions unit, separated along all internal walls of the church.
The group is dedicated to the history of the Virgin Mary in relation to the childhood of Christ. The program of the scenes is a special provision: the entrance wall is dedicated to the presentation of San Joaquin and Santa Ana, and from here the story takes place successively in the walls of the two sides, so to follow the development of the events described pictorially, we must contemplate the scenes alternately looking left and right as the ship moves toward the altar. 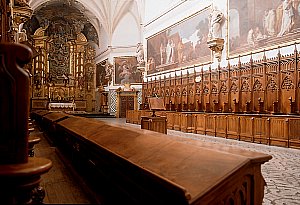 These paintings were very much when the Order had to leave the monastery following the seizure of Mendizabal in 1835. It lost almost completely the wall of the left, except for the cruise, and all were badly damaged. For this reason, to see the paintings preserved is evidence that some areas were repainted earlier this century by the brothers Buffet, also completely re-made murals that were not saved.

The seven murals of young Goya can be seen in the church of the monastery Zaragoza are for the right wall facing the altar, the walls of the transept, and the wall of the entrance.

(305 x 845 cm.), paint in 1774, Technique: oil / wall.
This fresco is located in a high frieze at the entrance of the two choirs.
The characters are San Joaquin, Santa Ana and the two cherubim which they announced their offspring: the Virgin Mary.

At the Gate of San Joaquin and Santa Ana, located on the entrance to the church, scenic highlights adaptation of painting the architectural space, a complication saved by Goya masterfully. The composition of angels announced path represents the parents of the Virgin, which are located on both hinges of the door.

Nativity of the Virgin

Dimensions (305 x 790 cm.), Technique: oil / wall.
In this table, the figures are arranged in a triptych. In the characters there is a great vitality to be inspired by popular themes. 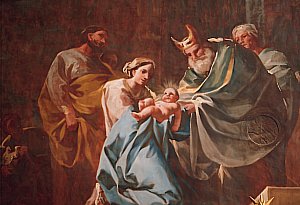 Nativity of the Virgin is the first picture we see on the right when entering the church. It shows Goya as a young artist, but the owner and all the formulas Baroque painting, which is trying to renew, and capable of giving to religious themes to make an unusual vitality derive from popular types of representation away regular court.

Dimensions (305 x 790 cm.)
Technique: oil / wall.
The characters are placed in a tripartite group on 3-tiered staircase which gives an air of grandeur to the stage.

Next is The Betrothal of the Virgin and St. Joseph. In it are reminiscent of the scene Forment counterpart in the altarpiece of the Pillar, as the post of High Priest. Other outstanding features are the composition of the scene as a sculptural frieze, and the work of the splendid robes of the figures. 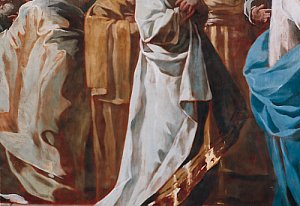 Dimensions: (305 x 790 cm.).
Technique: oil / wall.
The characters are arranged in a stair, which emphasizes the action, and the climb to Elizabeth's house is expressed by the progression of the buildings.

Drawing an arc painted on the left of the previous scene, Goya takes us through it to the next performance, The Visitation of Mary to her cousin Elizabeth, located outdoors, and which must be read from right to left, as we move toward the altar. It is magnificent harmony of colors (gold, blue, purple) and unsurpassed work of brush at the head of San Jose.


Technique: oil / wall.
In this painting Goya painted space mixed with real advantage because he knows the corners neatly off the wall. The scene is set in a triptych (taking the side walls), where the face occupies the central scene of circumcision. 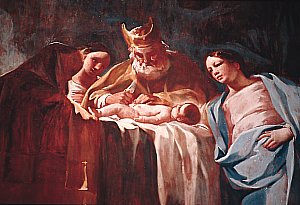 On the right side of the crossing is located Circumcision. In the center of the painting, the priest is preparing to carry out the operation, while a splendid Mary, robed crimson and blue robe, her face tilted toward his son. Has been called "the most beautiful head of Aula Dei."

Presentation in the Temple

Dimensions: (305 x 520 cm.).
Technique: oil / wall.
The composition of this picture is concentrated in a handful of circular pattern shifted to the left, closer to the viewer by placing a large altar.

The Presentation in the Temple is located on the right wall of the altar. Goya has the problems of visibility that will have the paint, and proposes a small group of characters, displaced to the left, highlighted against a dark background and uniform. The best of them are the faces of San Jose and the prophetess Anna.

The Adoration of the Magi

Dimensions: (305 x 1.025 cm.).
Technique: oil / wall.
The scene is divided into 3 levels. The characters are almost silhouettes several reports. The composition is also a triptych whose center is occupied by the main characters, but the King Gaspar.

In this scene of the Epiphany, painted on the left wall of the transept, opposite the Circumcision on the opposite side, overlooking the magnificent figure of King Gaspar, with its white mantle. For its part, the gesture of Melchor, taking the boy's leg tenderly to kiss Zaragoza recalls another example: the episode carved into the altar of La Seo by Hans Gmund.

Tours are conducted the last Saturday of each month, by appointment on the phone +34 976 714000 Zaragoza (Department of Education and Culture, Government of Aragon).

The trace of Goya in Aragon we can follow in the next places:

The Museum of Bellas Artes in Zaragoza.

The Provincial Museum of Huesca.

The Basilica of Our Lady the Pilar.

The Carthusian Monastery of Aula Dei.

The Archbishop´s Palace of Zaragoza.

The Parish Church of Remolinos.

Muel: The Sanctuary of Our Lady of the Fountain.

Others works in Aragon.