Located on the old mosque, it would probably be used as a church until in the 13th century the Mudejar apse with archaic zigzag decoration was added.
Later the central nave would be built and in the 16th century, the choir enveloping the tower; Outwardly, the building was unified through the construction of the classic Aragonese arch gazebo, under a clamped brick wall. Until the 18th century, new chapels were added, some on the fossil grounds, present-day San Pedro square.
The bell tower is the old minaret of the mosque; octagonal, has small rooms in the interior space; The staircase, covered by false vaults, develops between the outer wall and the inner rooms. It is similar to the octagonal minaret of Tauste. 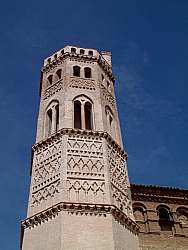 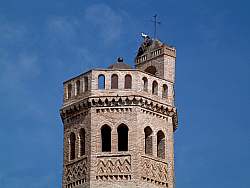 The Mudejar factory of the Church presents an apse, semicircular to the interior, although polygonal with five sides to the outside, a nave with two sections and an octagonal tower at the foot of the temple.
The wall of the apse outside is distributed in small overlapping decorative bands; in which they follow girdles of corners, series of zig-zag and bands of crosses in hollow.
The bell tower has an octagonal plan and internal structure of Almohad minaret. To the outside, the tower presents a division in three bodies, separated from each other by an imposing brick brick. The first body functions as a solid basement, with the walls of its lower half in slope, for better stability. All the faces of the second body receive the same ornamental treatment, as if it were a decorative tapestry, distributed in three areas, separated by corner friezes, in which decorative cloths of interwoven mixed arches, rhombuses and rhombus shapes are formed configuring battlements staggered The third body is the one that has suffered the most reforms due to its bell floor condition. 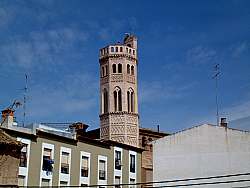 The mudejar as a survival of Muslim culture and art under Christian domination, it reaches its maximum splendor in Aragon.
Declaration Procedure of 19 Mudejar Monuments as Goods of Cultural Interest.
File inclusion in the Catalog of Aragonese Cultural Heritage of 91 Mudejar-style real estate.

Inside, the 16th century main altarpiece stands out; the covers of the Virgen del Carmen, and that of the Virgen de los Dolores, plateresque the first and Mudejar the second, both also from the 16th century: the dome of gallons with Santa Ana's pendulum, baroque of the 17th century, and especially highlights the primitive altarpiece of the Holy Christ, of wood, of the circle of Miguel Ximénez (1505). 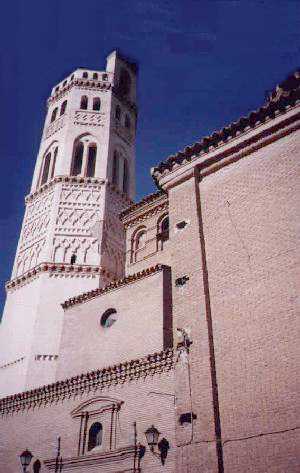 Other information of the Municipality

If you want Ample your information on Aragon you can begin crossing some Monasteries, o 40 Castles another interesting route is the Mudejar, Patrimony of the Humanity, also you can extend your cultural knowledge on Aragón examining its municipal and institutional heraldy without forgetting, of course, some of its emblematicas figures as San George Pattern of Aragon or its personages I illustrate adding to these data a minimum crossed by its history o some books.

Also Aragon enjoys a diverse and varied Nature where passing by plants, animals, or landscapes we can arrive at a fantastic bestiario that lives in its monuments.

The information will not be complete without a stroll by its three provinces: Zaragoza, Teruel and Huesca and ours varied Regions, with shutdown in some of its spectacular landscapes like Ordesa or the Moncayo or by opposition in the valle of the Ebro.

If reasons of work or relatives have taken to you Far from Aragon you can Download images of bottom, sounds or animations

Also you can dedicate you to the intangible ones: from the legend compilation that also does to universal Aragon you can persecute the presence of Santo Grial in Aragon.

Other pages on Aragon in Internet

Other current also you can interest.