Veruela, was the first monastery Cistercian of Aragon.

Veruela is located in a small valley formed by the Hueca River, whose source is very close to the monastery. The oldest document referring to the founding of the Veronense monastery is the confirmation by the Navarrese king García Ramirez of the donation of the places of Veruela and Oliva and their possessions to the Cistercian monastery of Santa Maria de Niencebas (Fitero, Navarra) in 1145 to the erection of separate monasteries of the Order.

The Royal Monastery of Santa Maria de Veruela is, since 1998, property of the Diputacion Provincial de Zaragoza, which administered it in state usufruct since 1976, the year in which it began its recovery.

The poet Gustavo Adolfo Becquer wrote here, in 1836-1864, his nine famous "Letters", as well as some rhymes and legends. The whole is surrounded by a wall (16th century) of 1 km of perimeter, opened by a gate in medieval tower to a tree-lined avenue leading to the great church (XII century), Romanesque portal and three tall ships covered with Gothic ribbing . From here you can access both cloisters, Gothic and Renaissance, which communicate with the chapter house, refectory, cilla, scriptorium and other rooms that are the scene of art exhibitions, concerts and prestigious courses. 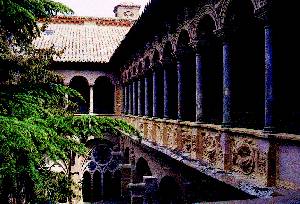 You also have a literary tour in the series "Los Monasterios Aragoneses".

The Somontano del Moncayo and his Natural Park They offer infinite itineraries to nature lovers.

Tarazona It is a Mudejar city and Borja, hospitable headquarters of good wines and beautiful palaces.

Other Cistercian monasteries in Aragon.